Members of the INSEAD 17J Golf Club have been organising several games in Fontainebleau in the summer, and are now starting to discover more of Singapore Golf faclities. They are  good group of relatively experienced players, and would like to meet other  INSEAD Alumni Golf players in Singapore, with whom they could organise a golf round, chat, and discover new golf locations. If you are interested in meeting like minded alumni please contact Alexander Appel

I am very pleased to share the news that the Financial Times (FT) has ranked INSEAD’s MBA programme #1 in the world again this year. To achieve this outstanding result, INSEAD scored very high across several of the FT ranking categories, including alumni career progress, international diversity and idea generation.

This recognition is a testimony to the efforts and accomplishments of our entire INSEAD community: our successful alumni, our world-class faculty and exceptional staff who deliver a transformational MBA experience for all students. We are grateful to our dedicated alumni, donors and friends around the world, whose contributions and expertise take our school to even greater heights.

In 2016, INSEAD became the first school with a one-year MBA programme to place #1 in the history of the FT rankings. INSEAD is one of only five schools to top the Financial Times MBA rankings. We are proud to share this distinction with Harvard, Stanford, Wharton and London Business School.
Press Release here 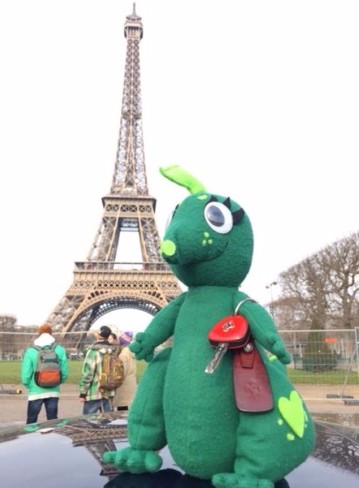 On 15 January 2017, Sami and Sally, our INSEAD mascots, were launched simultaneously from the Singapore and Fontainebleau campuses to promote the Salamander Challenge and INSEAD Giving Day. These initiatives are globally driven by alumni, and in particular by you, our volunteers.  Since the launch, Sami and Sally have been bringing the alumni community closer together through their adventures (you’ve seen some of these on our social media channels), as well as raising awareness about giving back to the school. The Salamander family has also grown to meet the demands of our global community.  They now include Sadie who was cloned in the Biotech hub of San Francisco by our innovative alumni who were super eager to get involved in the Americas as well as Lenny, Sami’s little brother covering the Middle East.

Many thanks to all those who have already welcome #SamiandSally, #Sadietheclone and #Lennythebro into their countries!  If you’d like to get involved, it’s not too late!  Read more about the Challenge and INSEAD Giving Day here.

You can help us to spread the news and rally alumni around these initiatives:
•    Join the Facebook group to post photos or comment on Sami and Sally’s travels
•    Check out the blog to see where #SamiandSally are and view their photos, follow them on Twitter
•    To welcome #SamiandSally, #Sadietheclone and #Lennythebro to your country, contact Marina

In Defense of Cosmopolitanism
Gianpiero Petriglieri, INSEAD Associate Professor of Organisational Behaviour, discusses the controversy about the value and failures of cosmopolitanism. He argues that business and society have much to lose, if we let an open-minded spirit turn into a luxury and a management tool and that it’s time to make cosmopolitanism good again.

No second chance at a first impression
Martin Gargiulo, Professor of Organisational Behaviour at INSEAD, says that first impressions can be very lasting, even if we think of ourselves as being objective. In fact, it is much easier and faster for us to make up our mind than to change it.

Draghi’s press conference was full of contradictions
INSEAD Professor of Economics Antonio Fatas says its no wonder investors are confused given the mixed messages at the ECB press conference.

Are markets influenced by political bias in the media?
Massimo Massa, Professor of Finance at INSEAD, discusses his research on how markets counteract a perceived media political bias.

It’s all relative: the four keys to family business longevity
According to INSEAD Professor of Economics and Political Science Morten Bennedsen and Research Fellow Brian Henry, firms with long-term planning in place are in a much better position to withstand the health shocks of their founders than those firms without. In addition, every long-lived family-run business combines four common themes in their heritage. South China Morning Post 2/12/16 Hong Kong

Incomplete U-turns on fiscal policy
INSEAD Professor of Economics Antonio Fatas points out that there is something disheartening about the OECD’s fair-weather friendship with fiscal stimulus.  Financial Times UK 30/11/16

Singapore-Russia ties are strong and can grow further: Tharman
During the dialogue chaired by INSEAD Dean and Professor of Economics Ilian Mihov at the Russia Singapore Business Forum, Singapore’s DPM Tharman Shanmugaratnam notes that the growth of Singapore’s economic relationship with Russia is faster than that with most other regions in the world. Business Times 26/11/16 Singapore

Upholding rules in the sharing economy
Reprinted from INSEAD Knowledge
According to N. Craig Smith, INSEAD Affiliate Professor of Ethics and Social Responsibility, there remains a role for regulatory bodies to ensure that the economic successes of organisations within the so-called sharing economy are not based on their ability to avoid taxes, standards and laws. Today 25/11/16 Singapore

Click here to see the links to get in touch with Alumni coordinating the many special interest clubs in Singapore Alumni Network.

Markets Trumped (cover story)
(Available upon request, please contact our team at [email protected] to get access)
Antonio Fatas, Professor of Economics at INSEAD, says that Trump’s “surprise win” is likely to lead to a long period of sustained volatility which might trigger a recession in the US, a flight to quality in financial markets, and outflows from some weak emerging markets.

Please click on this link for the latest edition of the Salamander magazine focussing on Entrepreneurship.

“At INSEAD, we often talk about how “entrepreneurship is in our DNA.” That sentiment is backed by data: More than half of INSEAD graduates — about 53 percent — participate in some type of entrepreneurial venture in their career. Considering that there are more than 50,000 INSEAD alumni, that adds up to a remarkable number of innovators spread across the globe…”

The books below contain the CVs of MBA students in the December 2016 graduating class who are members of the relevant club.

This e-book contains the CVs of Executive MBA participants in the GEMBA15 and TIEMBA16 classes.  Access the e-book via your CareerGlobe account (CV Books tab). Please feel free to contact the students directly using the contact details they have indicated on their CV. Please note that the 17J MBA CV e-book is available in your CareerGlobe account. If you are interested in visiting the INSEAD campuses to meet students, or would like to obtain further information about the recruitment process at INSEAD in general, please contact us on [email protected].

INSEAD Career Development Centre is happy to assist you with your recruitment needs.