On November 21st, we welcomed the Ultra Runner David Genecand at the Mere Royaume for a lunch-conference.

David is a genuine ‘Genevois’ who just returned to his hometown after a corporate career in Europe and North-America. David has embraced a very meaningful approach to performance, allowing him to reach new frontiers in sports and life in general. His latest achievement had been to run over 200km across Geneva’s city and countryside in October 2012.

David shared with us his personal drivers and values, gave us inspiring tips on how to increase endurance, create more energy and highlighted the importance of a balanced lifestyle.

And everyone walked the talk…. 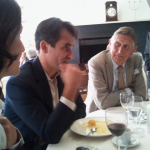 On September 14th 2012, we had the honor of welcoming Amine Tazi-Riffi, director at McKinsey & Company, as guest speaker to give us a talk on Africa – the Progress and Potentials of African Ecomonies.

Amine started the McKinsey & Company Maghreb office in 2004, is co-leader of the Public Sector & Social Practice for the EMEA region and is member of the African Council. He holds an MSc degree from EPFL, the MIT and an MBA from INSEAD (MBA95’D).

He presented the findings of the McKinsey’s Global Institute report on Africa – “Lions on the Move”, punctuated by his unique views, having led over 120 projects in the region for a broad spectrum of customers in the public and private sectors.

Here are some of the key take-aways:

So yes, it is the time for Africa and time to change our views on this continent!

Please click on the link here after to view his presentation.