Olivier Calloud (MBA’01J) was appointed CEO of Private Bank Piguet Galland & Cie SA in April 2012.
Avital Eliasov (MBA’04J) was appointed Chief Executive Officer of Quantum Global Capital Advisors in April 2012.
As reported in the previous newsletter, Michael Maeder (IEP’07Mar) assumed his new role as CEO of STC Switzerland Travel Centre AG on 15 February.
In March, Andrea Orcel (MBA’90J) was appointed co- CEO of UBS Investment Bank alongside Carsten Kengeter.
Michel Orsinger (AMP’96Jun) was appointed to the board of Nobel Biocare. Michel has been the President and CEO of Synthes, Inc. since 2007.
The board of directors of Metall Zug AG appointed Christoph Schüpbach (AMP08Jul) to the Group’s executive management with effect from October 1. Christoph will retain his role as CEO of subsidiary, Schleuniger Holding AG.
François Simon (MBA’80) has joined the executive board of MainFirst Holding AG , holding company of the an independent, privately owned bank.
10/10/2012 – GE: Will Polio Be Eradicated? 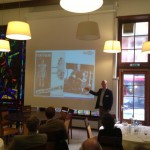 On October 10th, we welcomed at the Mère Royaume in Geneva Christopher Wolff and Jennifer Linkins that gave us a fascinating talk, on the polio eradication programme on which they’ve been working passionately for the past 10 years at WHO.

Can you believe that humanity has successfully eradicated only one disease – smallpox, last seen in 1977? Will polio, which kills or paralyses young children living in unsanitary conditions be the next one?

Christopher first gave us a great review on the history of this disease, how it became a priority after Franklin Roosevelt’s contracted it and how the introduction of the oral vaccine in 1961 proved so efficient in 1980 already, Polio disappeared from the US. Building on this success, a global programme led by WHO was started in 1988 and in 2006, 99% of polio had been eradicated and in 2012 victory was celebrated in India.

But polio remains endemic in Nigeria, Pakistan and Afghanistan and unless it is eradicated in the 3 remaining countries, the disease could spread widely around the globe. The battle on the ground is not just a case of vaccine delivery – instead, the fight involves overcoming difficult logistics, local insurgencies, suspicion of foreign elements and great game politics.

Jennifer Lipkins gave us then the financial views of the programme and the challenges they are now facing with a funding gap of 790 million to achieve full eradication by 2013.

We thank them for having shared with us their daily fight and truly hope they will be able to celebrate victory by the end of this year for the benefit of humanity.

Please click on the link below to see the presentation:

December 12th 2012 – Given the ambiance… it could have been in Fonty.. but no it was in Carouge, at the Comptoir des Délices that just reopened. Santa Kelly and Santa Ramon welcomed there guests with a little Santa hat and as promised Champagne, Hot wine were here to warm up the atmosphere.

Merry Christmas and Happy New Year to all our Swiss Alumni! 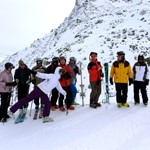 Never believe weather forecasts…! What was supposed to be a stormy week-end ended up in powder snow, sun and great fun! Over 50 INSEADers across generations and continents made it to attend this unique event… From fresh graduates all the way to early INSEAD generations met for skiing, drinking, eating and dancing… Zurich, Geneva, Basel were represented but not only… Alumni from Paris, London, Moscow, Canada, Sweden and more came all the way to ski & celebrate with special guests like Rolf Abdon, Chairman IAF Board of Trustees, and Daniel Labrecque, ex-IAA President. On Friday everyone met for dinner at ‘Al Capone’. Saturday was the sports day with 6 groups split between the “On-Pistes” and “Off-Pistes” skiers while others went for a beautiful snow-shoeing escape in Nature. In the evening, everyone met for drinks at ‘Aux Croquignoles’ and Andrew Hunziker, Swiss President ex-officio and member of the Swiss Board, generously offered the drinks on behalf of the INSEAD Alumni Association Switzerland. Dinner at “La Channe Valaisanne” was simply delicious with a choice of Cheese Fondue or Fondue Chinoise. Leila Ojjeh, President of the INSEAD Alumni association Geneva made a little speech to welcome everyone and thank Sonja Baile (MBA 07’J) for the fantastic organization thanks to whom a tradition started 15 years ago by ex-President Denis Harran and Audrey Barcha has been continued and given this year’s success is not ready to stop!