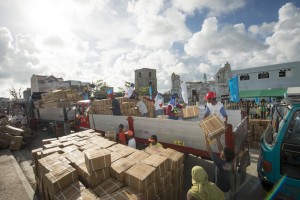 Typhoon Haiyan – one of the most powerful weather phenomena ever observed – devastated the Philippines on the night of 8th November 2013.  More than 11.3 million people were affected and nearly 700,000 people were  displaced.  Many islands and cities are still inaccessible.

Humanitarian organisations have been on the ground for over two months in the Philippines, among them the International Federation of the Red Cross and the Philippine National Red Cross, whose emergency response teams are working to meet the needs of victims.

Please enjoin our fellow INSEAD alumni in your National Alumni Association or your Promotion to contribute to our target of raising €30,000 by making a donation today to the on-going effort to rebuild for reconstruction works and to support typhoon victims.  The International Red Cross has put in place a link for INSEAD donations which tracks the evolution of the number of donors and the total amount.

To make a donation online, here is the link : https://www.ammado.com/community/145158

For direct donations on the Europe Campus, cheques should be made payable to INSEAD ENTRAIDE and sent to Véronique Fabre, INSEAD Boulevard de Constance, 77305 Fontainebleau Cedex, France.

For direct donations on the Asia Campus, cheques should be made payable to INSEAD ENTRAIDE and sent to James Middleditch, INSEAD Asia Campus, 1 Ayer Rajah Avenue, Singapore 138676.

On behalf of our countrymen, we in the INSEAD National Alumni Association Philippines would like to thank you and your alumni members very much for your support.