The connection between fictional spies and Switzerland are many. Who can forget the opening scenes in The Borne Identity, starring Matt Damon, an amnesiac government assassin, which feature a secret Swiss bank account, and Zürich’s blue trams, or Ron Howard’s film Angels and Demons, depicting a fictionalized CERN in Geneva as the setting for the launch of an international thriller. John Le Carré called Switzerland “the spiritual home of natural spies” and used Swiss locations as the backdrop in several novels, including his latest, Our Kind of Traitor, as did Somerset Maugham and Graham Greene. 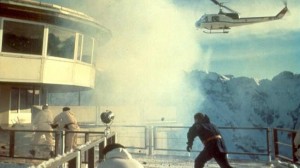 But the most famous fictional spy of all is James Bond, Ian Flemings fictional half Swiss, half Scottish, gentleman secret agent. Switzerland has been the setting of some of the most memorable Bond scenes, such as George Lazenby pushing an enemy into a Schilthorn snow-blower in On Her Majesty’s Secret Service (1969). Or the memorable bungee jump off the Verzasca Dam in Ticino at the start of GoldenEye (1995), according to Swissinfo.

With all that in mind, it is fitting that the upcoming Joint Business School Ball, hosted by the INSEAD Alumni Association of Switzerland, has created a spy-themed “Diamond Are Forever” gala event for alumni and special guests.
Tickets are on sale until November 13th. Book now.