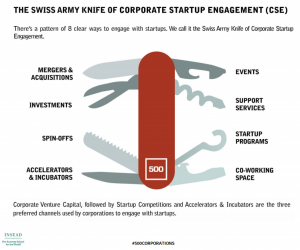 The myth is that big corporations are slow, dumb dinosaurs waiting to be ‘disrupted’ .. but reality is not so simple.

INSEAD and 500 Startups partnered to find out How The World’s Biggest Companies Deal With The Startup Revolution. Switzerland figures prominently in the report and not just because the authors used a Swiss Army Knife as a metaphor to explain large company engagement patterns with startups.

In fact, Switzerland is one of the top three countries for large-sized  company engagement with innovators.

The report co-author Khailee Ng, Managing Partner, 500 Startups, is a startup ecosystem expert who says that he paired up with the “academic firepower” of INSEAD to “cut through a dataset” of the top 500 companies in the Forbes Global 2000 ranking of the world’s 2,000 largest public companies by revenue, with the goal of discovering what they’ve been doing with startups and to find out more about successful collaborations.