Influence is a rare commodity, and women with power and influence even rarer. But that’s changing as Kristin Envig and Beth Krasna, panelists at the “Inspiring Women” evening conference in Geneva on March 4th, have demonstrated. Women can have a greater impact and there are several ways to do it  One method is to get active at the board level early on in your career. 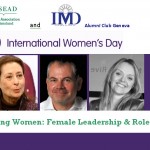 Beth Krasna is active on boards in fields as diverse as higher education, banking, and commerce. Another is to participate in professional social networks and get active. Kristin not only participates, she was an early entrant in the global business networking trend and she forged her own successful empowering women netowrking event and conference series seventeen years ago.

There has never been a time in history when women have have been so qualified and have so many opportunities to make an impact as right now, according to INSEAD Alumni Association’s Kelly Richdale (INSEAD MBA ’99), an executive at ID Quantique, and organizer of the “Inspiring Women” event for INSEAD and IMD alums. She says that women are being encouraged to “lean in”, a phrase popularized by the title of Facebook COO Sheryl Sandberg’s business book published last year, which rallies well-educated women to stop holding themselves back in their professional lives. The book has sold 1.5 million copies, is currently number 7 on the NY Times bestseller list, and Sony just bought the film rights for it in January. There is an international women’s network springing up around it, as well as social impact project funding efforts.

Clearly, the ways women can “lean in” are many. One growing trend is through professional networking. No one knows that better than Kristin Engvig, founder of the W.I.N  conference series for women entrepreneurs, executives and influencers. Her network includes 30,000 opinion leaders and 150,000 members. The conferences which will be in Tokyo and Berlin this year are supported by the likes of Suntory, HP, IBM, Pepsico, and Unilever, among others.

Another way is to become an active board member as Beth Krasna does it in an incredible range of domains. She is active in commerce, serving on the board of COOP, a multi-billion dollar Swiss-based retailer and Raymond Weil, a global Swiss luxury watch brand, in finance (she’s a board member of Banque Cantonale Vaudoise), in sustainability engineering (board member Bonnard & Gardel Holding), in culture (member of the board of the Fondation en faveur de l’art choréographique), and in higher education (Beth is one four females on the ETH’s 12-member board).

Both of these inspiring and influential women will be on hand to share their experience, ideas, and vision on March 4. Register now on http://www.amiando.com/Inspiring_Women.html