A full programme of events will enable you to reconnect with classmates while forming new bonds with other members of the INSEAD community. The Plenary Session will focus on sharing our School’s vision and gaining your insights.

As reported in the previous newsletter, Michael Maeder (IEP’07Mar) assumed his new role
as CEO of STC Switzerland Travel Centre AG on 15 February.

Michel Orsinger (AMP’96Jun) was appointed to the board of Nobel Biocare. Michel has been the President and CEO of Synthes, Inc. since 2007.

The board of directors of Metall Zug AG appointed Christoph Schüpbach (AMP08Jul) to the Group’s executive management with effect from October 1. Christoph will retain his role as CEO of subsidiary, Schleuniger Holding AG.

François Simon (MBA’80) has joined the executive board of MainFirst Holding AG, holding company of the an independent, privately owned bank. 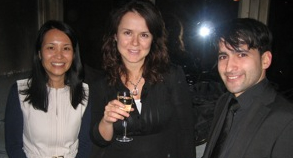 Earlier this year, the Basel Chapter held a series of After Work Drinks events, in collaboration with LBS alumni and SAMBA members.

The events took place at Acqua, a popular Osteria, lounge and bar in the centre of Basel. They proved popular, with around 25 participants from various business schoools joining in each the evening.

The next after works drinks event will be an Apéro at Ono Café Bar in Leonardsgraben on 20th November.

This year’s Geneva summer brunch took place in the magnificent setting of Vuillerens Castle near Morges. Alumni and their families got to reconnect, network and enjoy the castle’s gardens of irises, sculptures and parkland. So they could truly enjoy the event with a minimum of distraction, the committee even organised a babysitter for children.